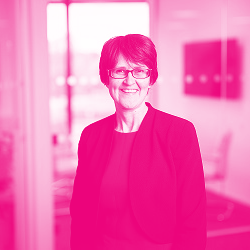 Ros Deegan joined OMass Therapeutics as CEO in May 2019 from Bicycle Therapeutics where she served as President, Chief Business Officer and a Director of the US subsidiary of the Company. Ros established the company’s Boston-based subsidiary and over a three-year period led three major transactions and grew the US organisation to more than 20 employees. Prior to that Ros served as Senior Vice President, Business Development and Operations at Trevena, Inc, where she had previously held the role of Head of Finance and Operations. During Ros’ tenure at Bicycle and Trevena, the companies moved four programmes into the clinic, and raised over $300 million in private and public financings. In her earlier career, Ros was Director of Business Development at GSK in the US and, prior to that, she served as Director of Operations for GSK’s Centre of Excellence for External Drug Discovery (CEED) and as Marketing Manager for GSK’s UK launch of Bonviva for post-menopausal osteoporosis. Ros is a graduate of Cambridge University and received her MBA with distinction from INSEAD.