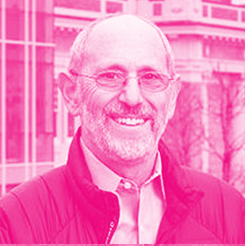 Jonathan Fink is the Director of the Portland State University (PSU) Digital City Testbed centre, a research centre bringing together a network of academic, corporate and nonprofit stakeholders to test urban technological and policy innovation. He’s also a Visiting Professor of Urban Analytics at the University of British Columbia, where he co-directs the Cascadia Urban Analytics Cooperative with the University of Washington. Trained as a volcano scientist, his research and policy interests include urban sustainability, conservation biology, and renewable energy.

Before becoming PSU’s first Vice President for Research in 2010, Jonathan spent 30 years at Arizona State University (ASU) in various roles where, in ten years as VP for Research, he oversaw the tripling of external funding, the launching of internationally recognized institutes in sustainability and biodesign, and stronger ties between academic research and regional economic development. While serving as Director of ASU’s Global Institute of Sustainability, he shifted his primary research focus from natural hazards to cities.

Jonathan has a Ph.D. in Geology from Stanford University and a B.A. in Geology and Biology from Colby College. He is a fellow of the Geological Society of America and the American Association for the Advancement of Science, a Trustee of the Oregon Chapter of The Nature Conservancy, a member of the Board of Advisors of the Smithsonian Environmental Research Center, and a member of the National Advisory Board of KB Home.